The move was prompted by volume, as well as a desire to eliminate processors and associated consumables, Production Manager Billy Ricks told News & Tech. “We needed another machine because of the volume of plates we output and we needed redundancy,” Ricks said. “We also considered the Raptor 68 (plate processor) and what it takes to keep it clean — and monthly maintenance to keep it clean because of the violet plates.” Ricks said the processing of the violet plates resulted in a significant amount of polymer settling in the CTP equipment. “When we were looking to buy a new unit I knew there was a process-free plate out there, and in order to be more green we decided to look at that,” Ricks said. “I was pretty well satisfied that the technology had been proven and was reliable and that it would be a good fit for us.” The Cron-ECRM 3664 is a 64-laser-diode unit with built-in redundancy, which was also a key factor in the paper making the switch. “With the technology of this thermal platesetter, if one laser goes out, you can still burn plates using all of the lasers up to that one,” Ricks explained. “You shut off the one that’s out and the ones above it and you can still use all of the others.” The Daily News first transitioned from film to CTP in 2009, at that time opting for ECRM’s Mako Newsmatic. The newspaper had been running SLP Replica ECO LCV (low chemistry violet) plates. The Daily News retained the 7-year-old violet machine as a backup system to the new infrastructure.

The Daily News is part of the Southern Newspapers Group and in addition to its own daily, produces the Nacogdoches Daily Sentinel and other weekly and bi-weekly papers in the area on a commercial basis. The paper claims a daily circulation of 10,400 and 13,500 copies on Sunday. “We run about 5,000-6,000 plates through our CTP per month and we had started having some problems with the older ECRM.” Ricks said. “Before we got the new thermal unit, we had to output our plates elsewhere a couple of times.” In addition to improved reliability, the thermal unit is more user friendly and increases plate output by as much as 10 plates an hour. “We went from between 58-60, up to about 70 plates per hour on the Cron,” Ricks said. “With the old units, if you had a problem and you had to open the unit up, you’d usually lose a plate, but with the Cron that’s not the case — and it’s a lot quicker.”

The Daily News uses a K&F vision punch bender that it was able to upgrade and convert to handle the process-free plates. “We edge bend the plates that come out of the thermal unit and we haven’t had any issues,” Ricks added. He said he chose not to converge thermal and violet plates to one bender because that would’ve required retraining the cameras each time the paper swapped from one to the other. “At some point, we will add another bender, but our registration hasn’t suffered any,” he said. “The plate contacts in three different places.” The Daily News had to do some remodeling to its imaging department to accommodate the new equipment, but overall installation was relatively simple. The new machine was up and running within a day and half of installation, Ricks said. “The Cron makes its own vacuum and so no air or water has to be added,” he explained. “As long as you have the electrical in place and the footprint for it, that’s all that’s required.” And without the additional components and plate processing, that footprint is much smaller than traditional platesetters. The Daily News is running a mix of Puzzleflow workflow software and Laboo software. Laboo, which is included with the Cron-ECRM package, is a1-bit TIFF catcher that is added to the The Daily News’ network and also acts as the management system. This includes manual and/or autoloader operation, CTP plate imaging management, punching and exit bridge networking with the platesetter in coordination as a CTP network. The most recent release of Laboo, version 5.0, includes remote diagnosis functions and QR code controlling. Touchscreen functionality is also available. SLP offers three-year warranty on the Cron-ECRM that covers all parts, excluding consumables parts. Laser diodes are warrantied for three years, or accumulated plate output of 200,000 plates. 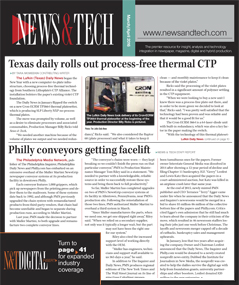